skip to main | skip to sidebar

The website is up and running, it is not fully complete but there is a section where you can contact our member who is looking after memberships at this time.
All the money raised from membership's will be used as a tool to improve The Ganaraska Wild Steelhead associations goals.
Please become a member and help to resto...re this watershed to it's former glory. Without memberships and active members it will be impossible to reach our goals.

Posted by Ganaraska Steelhead at 12:48 PM No comments:

The Ganaraska Region Conservation Authority is looking for volunteers to help plant 1500 shrubs and trees along the main branch of the Ganaraska River.

At 4135 Kellogg Road, north west of Port Hope. Parking is available along the road.

Also, please bring appropriate clothing, water in a water bottle, a shovel if you have one, and rubber boots or waders. We do have to cross the Ganaraska River, and have limited waders for people to walk across in.

Posted by Ganaraska Steelhead at 12:42 PM No comments:

Right now we will be allowing anyone to post here. I don't know if that will change when we start accepting memberships or not.

If you are interested in joining our association here is the link.
http://gwsteelhead.com/pagefiles/contact.html

Fish are going up the ladder pretty good today.
Looking like a larger average size!
Posted by Ganaraska Steelhead at 6:55 PM 1 comment:

"Our tradition is that of the first man who sneaked away to the creek when the tribe did not really need fish."

~by Roderick Haig-Brown, about modern fishing, A River Never Sleeps, 1946~ 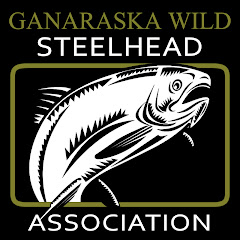